The Sermon You Preach Offstage 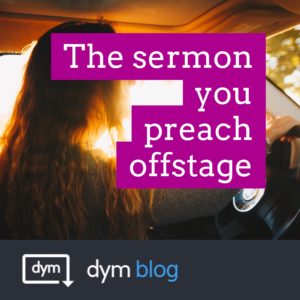 Every youth ministry has that student.

You know the one I’m talking about.

For whatever reason, there’s always that student that isn’t paying attention. Maybe they’re on their phone. Maybe they’re talking to the person next to them. Maybe they’re making fun of everything you’re saying during your sermon.

When I was a teenager, I was that kid.

During my time in my church’s youth group, we had a leader named Mr. Donald. He was an incredible youth leader, but at the age of 15, I didn’t put much thought into his leadership of our group. I made jokes and talked during his teaching in addition to being horribly disrespectful almost every week. I can’t tell you even just one of Mr. Donald’s sermons from my teenage years. However, here’s what I do remember:

At the end of my freshman year of high school, I had mentioned during youth group that I was going to be trying out for my school’s dance team. On the day of the audition, I was with my father on the way to the try-outs. Suddenly, my father’s phone rang. He answered it and handed it to me.

It was Mr. Donald.

He was calling to pray with me before my dance audition.

Despite the disrespect I had shown him week in and week out, he chose to love and reached out to me in a moment I needed it. I look back now and see that I do remember one of Mr. Donald’s sermons; however, it was not one that he preached from a stage behind a podium. It was one that he preached with his actions.

Fast forward more than a decade later, to now being a youth leader myself. Recently, I was teaching my students and everything was going so well. The lesson flowed. My group was engaged. God was working. Until I looked to the back row to find one of my middle school students fast asleep. I remember thinking at that moment that he was missing out on a good word, and I wished he had been awake to hear it.

That evening, that student sleeping in the back row of the youth room needed a ride home. I offered to take him home, and during the entire car ride, he shared everything that was going on in his life.

I simply talked to him about everything he was sharing.

When we reached his house and he got out of the car, the Lord spoke to me in that moment saying, “He won’t remember your message from tonight, but he will remember how you treated him on the car ride home.”

It was then that I realized that as youth pastors, we can have the best programming, the most Instagram-worthy stage designs, and quotable sermons. However, there will always be those students that could care less.

The students that fall asleep.

The students that are rude.

The students that have a lot going on behind the scenes.

When we step off the stage, it is those very students that deserve to see us preach a sermon of love with our actions.

We are constantly teaching the message of the God who shows us a love that we don’t deserve.

It’s time we practice that ourselves.

My prayer is that we would all examine ourselves and ask what sermon our lives preach the minute we step off the stage.

Karli Loving is a Youth and Children’s Pastor from Lawton, Oklahoma. She is passionate about seeing the Lord move mightily in the next generation, as well as encouraging diversity in the area of youth ministry. Karli is a fan of Jesus, loving others, and chocolate milkshakes.