8 Things White Youth Pastors Can Do About Racism 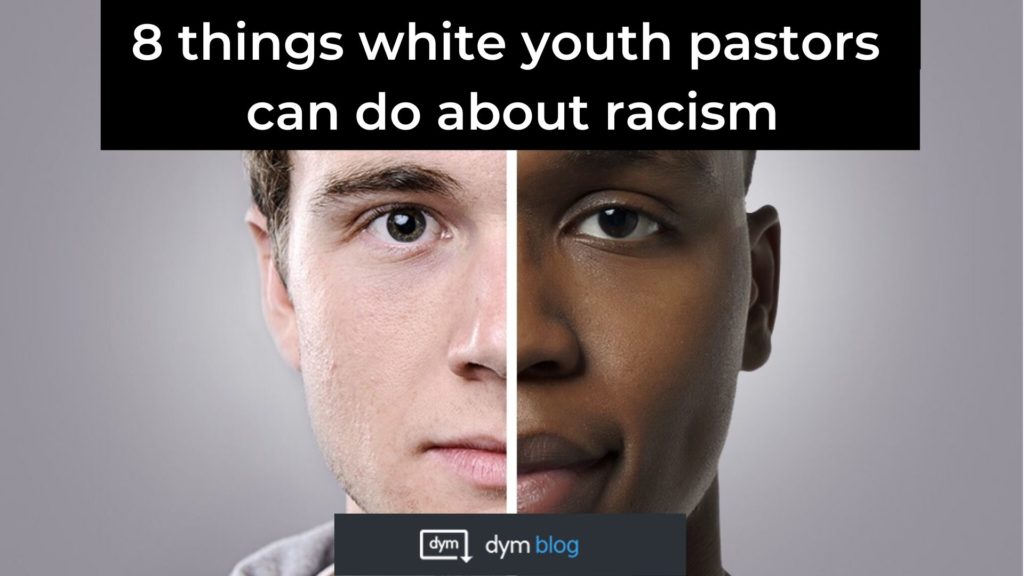 (From a black youth pastor)

I’m a black youth pastor at Restore Community Church, in Kansas City MO. The month of May 2020 has been especially tragic for the African American community.  Beginning with Ahmaud Arbery’s killing at the hand of two white citizens, the Coronavirus disproportionately affecting the African American community, and most recently George Floyd’s death at the hand of white police officers. Many of my white friends have been asking, “What can I do?”

They say something needs to change, but what can they do?  I continue to see this frustration from my white brothers and sisters in Christ every time these things happen.  Their only options seem to be outrage on social media or remaining silent for fear of saying the wrong thing about these often complex and multifaceted issues.

I’ve pulled together a few very simple action points.  You can do all of them or none of them.  Many of them will require time and effort on your part.  Four of these action points were things I learned from the book, The Color of Compromise: The Truth about the American Church’s Complicity in Racism. If you’d like to learn more, please pick up the book! It’s a book I read this month and believe every Christian American should read to better understand the context we find ourselves in today. The other four are just my own thoughts from experience.

Those are some initial things you could do this week. I’m not an expert on this topic.  I’m just like you — a Youth Pastor trying to navigate this world and helping my teens do the same.  I don’t speak for all black people everywhere.  Some would adamantly oppose my last point.  However, I haven’t seen any other helpful suggestions for my white friends yet, so here is a starting point.

I do hope anyone who reads this knows my heart for Jesus and my love for all people. Race is a sensitive thing to discuss — especially digitally as it leaves no immediate opportunity for a quick back and forth to clarify something that may have been received poorly. If something I said rubs you the wrong way, please let me know so we can start a conversation. It may just be a misunderstanding, or it may be a genuine conflict. Either way, let’s chat! I hope this is helpful to some and empowers you to speak more freely whatever your race. We are all made in the image of God.

Theo Davis serves as the Multi-Site Youth Pastor at Restore Community Church in Kansas City, Missouri.  He has worked in youth ministry for 15 years in a variety of settings which include church plants, rural churches, and mega-churches on the East Coast and now Midwest. He received his degree in Youth Ministry from Eastern University in 2008 and has continued to leverage his education with real-world experience. He and his wife Malia are huge gamers and named their kids after video game characters — Zelda & Shepherd (from The Legend of Zelda and the Mass Effect Series).  Theo also loves action figures and spends his spare time developing his musical and visual art talents.  Follow him on Instagram @theo_davis