A chance to preach 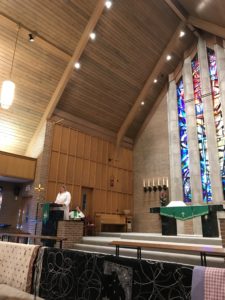 On Sunday, I watched one of my former students, Marcy, preach in my congregation – the congregation where she grew up.  She stood at the pulpit, full of grace, and gave a beautiful message on Exodus 16:2-15.

Among other things, what impressed me about Marcy’s message was what she didn’t do. She didn’t revert to her adolescent self. She didn’t wax poetic about her childhood at Faith. She didn’t share memories.

Instead, Marcy was a pastor, passionately preaching the assigned texts for the day.

This is fitting because next week, Marcy will be ordained as a pastor.

Our congregation is the last place she’ll preach as a lay person.

It’s also the first place she preached as an awkward high school senior as part of our congregation’s long history of Youth Sunday.

As a senior, Marcy stood up and articulated her faith, attempting to weave her story in with the day’s liturgical lessons. She did so in front of her people, in a place that had nurtured her faith since birth.

Her words weren’t eloquent that day. They weren’t philosophical. They weren’t theologically significant. She didn’t exegete the day’s scripture like a Bible scholar because – news flash – she wasn’t. Instead, she made people laugh as she shared parts of her journey. And then she pointed them to God.

Some people might not have called what Marcy did that day a sermon. To some, she spoke, gave a talk, or shared her testimony. But that day, in Marcy’s mind, she preached.

Long before she began to contemplate a call to ministry, Marcy preached.

Long before anyone affirmed her gifts to ministry, Marcy preached.

Her home congregation welcomed, heard, and affirmed her words. In doing so, it affirmed a not-yet-realized calling.

So often, we shy away from putting young people in the pulpit.

We fear what they’ll say (or what they won’t say).  We worry they’ll inadvertently offend someone. Or we shy away from how much work it is to coach someone else in preaching.

But what Sunday reminded me is that giving young people the opportunity to preach is always worth it.

For some, that moment is simply a chance to speak their faith into being; to participate in a significant milestone in their faith formation.

But for others, that moment will be something more. It will become the beginning of a sacred calling – A chance to try out an identity and discover their voice; To recognize they, too, might one day wear the title, Pastor.

That’s what happened for Marcy seven years ago.

Who knows what young man or woman it will happen for next when you give them the chance to preach.