3 Things Every Pastor Should Learn from MLK 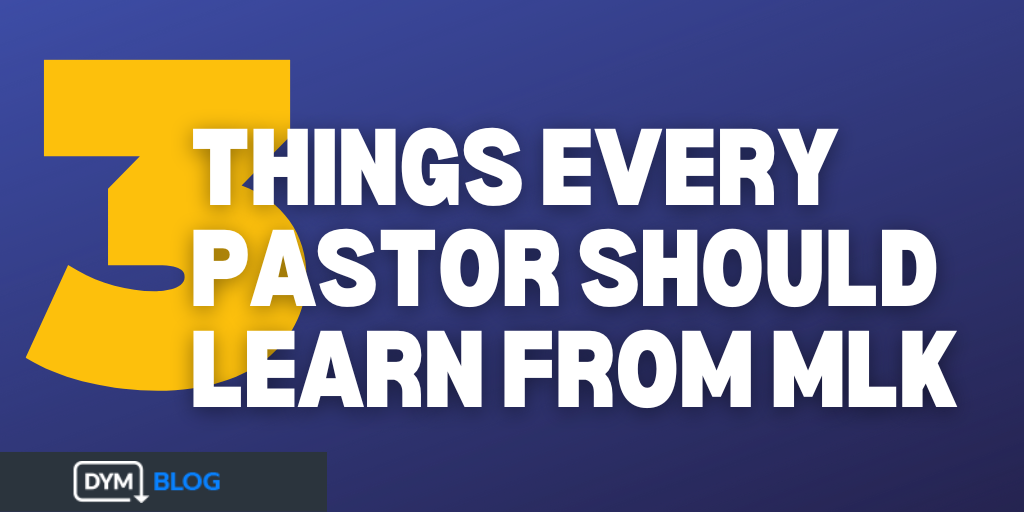 It’s that time of year when everyone floods their feeds with recycled black and white photos of Martin Luther King Jr and includes one of the many one-liner quotes in their caption. Things like, “I have a dream,” or “That we will be judged, not by the color of our skin, but the content of our character” Or “Darkness cannot drive out darkness, only light can do that.” The list goes on. Now, these aren’t bad things. However, I fear in our quick recycling of social media posts to appear relevant, we are actually missing out on much deeper truths from his life. By not pausing and examining this figure, who was assassinated for his relentless pursuit of justice and reconciliation, we miss out on how his life can continue to impact us today beyond a holiday sale. While there are hundreds of lessons we could learn from this black pastor’s life, here are just three which apply to those of us who are in ministry.

He never dehumanized others.
We live in a new age of storytelling. If a news story gets popular or your post goes viral, it’s likely there is a hero or villain. The algorithms currently favor controversy and people favor drama. We all tend to view things very black and white. So, if we are the good guys, there must be villains. This is dangerous because villains can be demonized and dehumanized. However, we are interacting with other humans, other souls, other image-of-God bearers. So, when we dehumanize others to win an argument, we are actually losing.

Dr. King lived during a time when the evils of overt racism were normal, popular, and legal. “Jim Crow” laws across the United States legalized segregation under a “separate but equal” mindset. However, the accommodations for whites over their black counterparts were anything but equal. Black citizens were treated as second class and were often dehumanized at the hands of our white siblings thanks to culture and laws on the books. Dr. King reluctantly but firmly pushed against this in the name of Jesus. And he never demonized his white brothers and sisters in the process. Dr. King carried himself with honor and respect. He was sharp but slow to anger. He made cuttingly truthful observations but not in a “clap back” sense. Interview after interview, letter after letter, we see Dr. King appealing to reason and scripture. Not personally attacking those he disagreed with.

Friends, let’s follow Dr. King’s example and not the example that so many politicians these days make. While I respect leaders on both sides of the political aisle, too often their example is one that is purely appealing to their base. Let’s not be Christians who are so focused on winning an argument that we dehumanize and steamroll the very people Jesus has called us to reach. The broken, the lost, the sick, the poor, the children (teenagers), the widow, the immigrant, the prisoner, and the most overlooked parts of society.

Fellow youth workers, we live during a time where there is no shortage of controversial topics or perspectives each of us could have. Some of us are Republicans, and some are democrats. Some of us support a traditional view of sexual relationships and some support an LGBTQ view. Some of us love the MCU (Marvel Cinematic Universe) while others love the DCEU (Detective Comics Extended Universe). Some of us support traditional views of gender while others of us support a more fluid view. Some of us are iPhone users while others are Android users. Now, I bet most of us had powerful internal reactions to one or more topics I just mentioned. But here is the question I want you to ask yourself: when was the last time you had a deep conversation with someone with an opposing view? When was the last time you intentionally sought out common ground with that parent who is always criticizing you?

It is very easy for us to plant our flags in the ground and declare our stance and run over anyone who disagrees with us. But Dr. King didn’t change America by touring exclusively black churches and never talking to white people. He didn’t build a massive coalition consisting of black and white people by demonizing every white person in America. He did it through conversation and love. He did it through seeing each individual as an image bearer. He did it by finding common ground.

Controversial in his time, respected hero in ours.

Today it is easy to say we love Dr. King, and he is a hero. It’s easy to post a picture of him on social media on his day. It’s easy to think that if we had lived during his time, we would have been marching the streets of Selma right along with him. But let’s not forget he had enemies on both sides. He was hated by many. He was spied on by our government. There were some white people who thought he was rushing change too quickly and needed to slow down. There were some black people who thought his approach of non-violence wasn’t enacting change quickly enough and wanted to take the movement in a different direction. Ultimately, he was so controversial that an assassin’s bullet found its mark, ending Dr. King’s life. He knew the threats, he knew the dangers, he knew the risks in so many relationships. Yet he pressed on.

Fellow Christians, his work isn’t done. Our nation continues to pull off the Band-Aids of our racist past and discover that decisions made 50-100-400 years ago continue to affect all of us today. As a black pastor in Kansas City, Missouri, I see firsthand that the work isn’t done yet. When we hear someone complain of injustice, we must investigate. When we see an injustice, we must speak up. When we are complicit in injustice, we must reckon with whatever role we play and walk with those who are hurting, no matter how our friends may perceive our actions. Our students take notice of what we say and do, yes. They also take notice of what we don’t say and what we don’t do. Let’s give them an example to follow. We won’t always get it right, but thank God for His grace.

Theo Davis serves as the Multi-Site Youth Pastor at Restore Community Church in Kansas City, Missouri.  He has worked in youth ministry for 16 years in a variety of settings which include church plants, rural churches, and mega-churches on the East Coast and now Midwest. He received his degree in Youth Ministry from Eastern University in 2008 and has continued to leverage his education with real-world experience. He and his wife Malia are huge gamers and named their kids after video game characters — Zelda & Shepherd (from The Legend of Zelda and the Mass Effect Series).  Theo also loves action figures, and spends his spare time developing his musical and visual art talents.  Follow him on Instagram @theo_davis