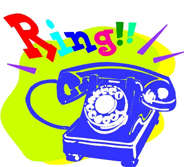 Upon seeing it was the parent of one of my teens, I immediately took a mental inventory of what I might have done to anger or upset this mom.

You see, my experience has taught me that when a parent calls, I’ve almost always done something wrong.

Parents don’t generally call to tell me how good I am at ministry, or how thought-provoking they heard our most recent discussion was, or to thank me for investing in their teen.

Instead, they mostly call to yell at me.

So I picked up the phone and braced myself.

About five minutes into the conversation, I finally began to relax when I realized this mom hadn’t called because she was angry at me.

Instead, she’d called because her teen was apprehensive about an upcoming event she believed was important. She wanted to see if I had any suggestions for how to talk to her about this experience. Her goal was to help reduce her child’s anxiety about the event in order to help her feel more comfortable participating in it.

A few weeks later, this same mom signed up to be an adult leader at the very event her daughter was uneasy about. She did so in order to experience it alongside her child and thus, create opportunities for conversation with her about something important.

At the conclusion of the event, I felt nothing but gratitude for this parent.

Beyond that, however, I was reminded that parents are not the enemies of youth workers; They are our partners.

I left wishing more parents approached ministry and parenting the way this mom did.

But then I realized, how often do I invite parents to get involved in ministry the way this mom did?

Truth be told, even that’s an inaccurate depiction of the situation. In reality, this mom took the initiative to call me and then serve as an adult leader. I didn’t actually ask her to do either of those things.

But I should have.

If I seriously believe that parents are the primary spiritual influencer in their child’s life, then as a youth worker, I not only have a responsibility to help equip them for this role in their home, but to make the space for them to engage with their teen in my ministry as well, knowing that doing so has the potential to create shared memories and foster deep conversations.

Such a role should never be something I treat as a burden, but instead as the privilege it truly is.