Teaching the Narrative of Scripture

People used to tell me that my degree was in a fairly useless field. After all, what good does studying history do? These days, I’m finding myself being more appreciated for sheer amount of data, facts, and historical analysis I can reproduce.

I’ve discovered that studying history has been helpful in another area as well. You see, when we study any event in history, we always look at the bigger picture. There’s no analyzing an event without looking at the preceding history, the context.

The Narrative of History

Take the Second World War for example. You cannot fully appreciate how this war happened without studying the First World War first. After all, the harsh peace treaty in 1918 at the end of the First World War, combined with the deep desire to humiliate Germany who lost that war, was instrumental in Hitler’s rise to power in Germany.

This is true for practically any event you study. Nothing ever happens in a vacuum; everything is influenced by preceding acts, decisions, and sometimes even by things outside of anyone’s influence. If the winter in Russia in 1812 had been milder for instance, one can assume Napoleon would have conquered mother Russia as well—completely changing the course of history.

History is one narrative, with events across countries, borders, and cultures influencing each other. It’s an interlinked chain of events, where every action leads to a reaction. This is called causal logic, as opposed to deductive or inductive logic. You cannot ‘reason’ why WWII happened, you can only find its causes in the preceding history.

The problem is that teachers often omit that bigger picture and treat events as independent ‘happenings’, isolated incidents. This results in students knowing facts, but not relationships, in them being able to reproduce dates and details without understanding the why and how behind them. The causal logic is missing.

The Narrative of the Bible

Scripture is one narrative as well. The Bible is God’s story. It’s one story, one narrative, that started before the foundation of the world and will end when God wants it to. It’s not always evident, especially in the Old Testament, since that’s not chronologically ordered in our Bible. But you cannot understand the New Testament without the Old. 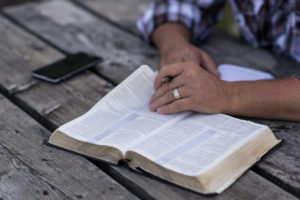 So we often treat the Bible as isolated events, or teachings. Take Paul’s letters. How often do we teach on a couple of verses, without putting them in the bigger picture of the church in that time, of Paul’s own personal history, of the context of the Gospel. We show inductive or deductive logic, but not the causal logic that is so much easier to follow and understand.

The Gospel is one narrative as well, one redemptive story that started before God created mankind. Even before Adam and Eve sinned, God knew, and He had planned salvation for us all. His mercy and grace as embodied in Jesus Christ are evident from Genesis 1 all the way to Revelation’s final chapter—and it will be so in all eternity. Look at the calling of Abraham, who was neither good nor righteous when God called him. He was an idol-worshipper! He was chosen because of God’s character, not because of his own.

Jesus Christ died for our sins, not because of rational reasons, or some four-point argument we teach our students, but because everything God had said and done before that causally culminated in this. Jesus was and is the only solution God could have ever come up with, considering His character. Jesus’ sacrifice was, in a way, inevitable.

If we teach the Bible, if we preach the Gospel, we have to show that narrative, that bigger picture. We have to explain that causal logic, instead of merely pointing out facts and details. Because at the end of the day, it’s all about God’s love which was evident from before time was created, not about rules and regulations. Relationships cannot be explained in facts, only in causal terms.

(P.S. This is just one of the aspects of the power of story I discuss in my book Storify: Speaking to Teenagers in a Post-Christian World. You can find the e-book on Amazon, or the print version on the Youth Cartel website.)