Impersonal communication seems to bring out the worst in people. I’m sure you know what I mean: those emails you get from church members, parents or others with a tone and message you know they would never use in a personal conversation or on the phone. Not all of them may be labeled hate mail, but I’ve had a few that came pretty close.

What’s important to remember when you receive and read this kind of hate mail, is that there’s always a story behind it. It’s easy to get very angry (been there), to send back an equally angry email (don’t!), to discuss it with others (usually also not a very good idea) or to directly report the offenders to the senior pastor (try to resist that urge).

I came across this picture on Jon Acuff’s site which explains exactly what I’m talking about. People who send angry mails, hate mails aren’t happy people. There is always something wrong in their lives and they’re taking it out on you. 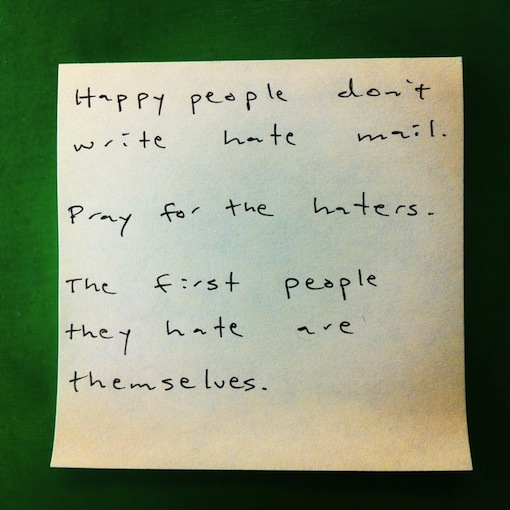 That doesn’t mean you’re innocent, you may have actually done something to deserve a critical remark, but it does mean their reaction is out of proportion. That means it’s up to you to bring it into the right proportions again, to think about it the right way.

And that starts with prayer. Honest, deep-felt prayer to God about whomever sent you that hate mail. Prayer for wisdom, for discernment, but above all for a heart filled with Christ’s love and compassion. When you’ve accomplished that, then you can respond and deal with it the right way.

I remember one very upsetting email I got which really hurt my feelings. After prayer and a ‘time off’ to let my emotions cool down a bit, I asked for a personal meeting. It turned out this person had a lot of things going on, none of which had anything to do with my or the youth ministry. It had just gotten to a point where something I did was too much, it was the proverbial straw that broke the camel’s back. So we talked and I listened and we had a deep conversation about it. Afterwards, I was really grateful because I’d been able to get to the core of the problem instead of lashing out at the hate mail that was just a symptom of an underlying problem.

Try to think about hate mail the right way: pray for the person who sent it. Happy people don’t send hate mail.